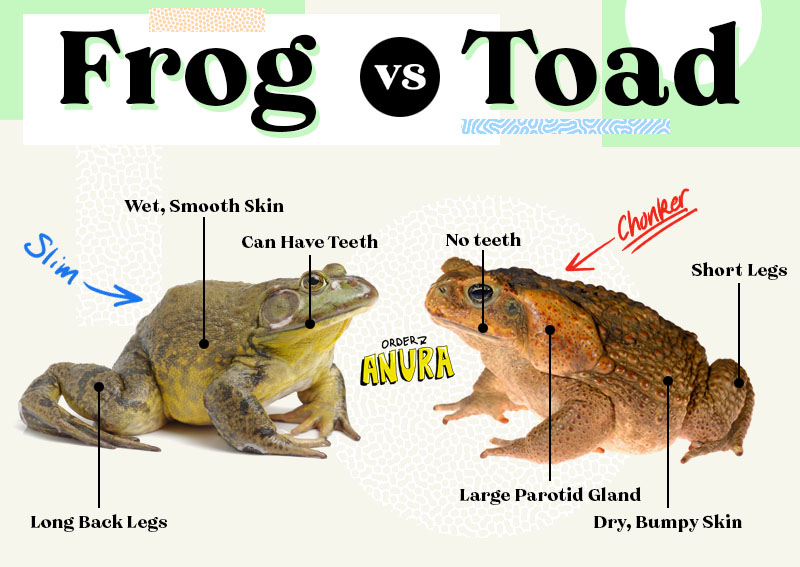 Differences Frogs and Frogs – Frogs and toads are amphibians with the ability to live in two realms. Although often considered the same, the two are different. Then, what is the difference between frogs and toads? The following is a scientific explanation.

By most Indonesian people, frogs and frogs are often considered the same or the terms are interchangeable. This is natural, because the two species with the ability to live on land and water at first glance have the same shape.

Getting to Know Frogs and Toads

The terms “frog” and “toad” are taken from the terms in English, namely “frog” and “toad”. Frog or frog is the name for amphibian animals from the Ranidae tribe with the main characteristics of smooth skin and able to jump far.

Meanwhile, Toad or toad is the name for amphibian animals from the Bufonidae tribe with the main characteristics of rough skin and short jumps.

In contrast to England which only has species from the two tribes, it turns out that not all frogs and toads in Indonesia only come from the Ranidae and Bufonidae tribes. For example, those from tribes from the order Anura, including Dicroglossidae which houses a frog as big as a chicken in Enrekang (Limnonectes grunniens).

Frogs and toads are species of the Anura people that are spread almost all over the world. In general, these animals have the following characteristics:

The body is short and broad, consisting of a head, body, and has two pairs of legs with larger hind limbs.

Webbed feet are used for jumping and swimming

Both lay eggs in calm waters. The eggs that hatch will grow into larvae known as tadpoles. Furthermore, the tadpoles will undergo metamorphosis into frogs or toads adults.

Difference Between Frogs and Toads

To distinguish frogs and toads, we can tell by looking at their physical or morphological characteristics, such as body shape, hind legs, skin, jumping ability, and their habitat.

The physical differences above are not always true. Because, in some species of frogs such as the red toad (Leptophryne cruentata) which is often referred to as the red frog or in English called Bleeding Toad or Fire Toad. In fact, when viewed from its physical characteristics, this species has slender hind legs.

Toads and toads are amphibians that breathe using skin. Therefore, even though they can survive on land (especially frogs), they still need moisture to breathe.

In Indonesia, there is one species that is completely aquatic or lives in water, namely Barbourula kalimantanensis or the lungless frog.

Benefits of Frogs and Toads

Indonesia has about 450 species of frogs and toads. This number represents 11 percent of the entire Anura nation in the world. As insectivores, both have an important role for natural ecosystems and can be pest control.

This provides benefits for the agricultural sector, because insect pests will be reduced by the presence of frog and toad populations in the rice fields.

In addition, frogs and toads also protect the home environment from disease outbreaks caused by mosquitoes, cockroaches, and termites. Not infrequently some people deliberately create artificial habitats so that these animals come and live around the house. The trick is to make a pond or pot containing aquatic plants.

Frogs and Toads are Increasingly Threatened

Based on several studies, now the existence of frogs and toads is increasingly threatened. There are four main factors that cause disruption to the population of both, namely:

Loss of habitat and wetlands caused by eutrophication, pollution, the introduction of foreign fish, deforestation will cause the population of frogs and toads to decline.

Pollution and UV-B radiation in industrialized countries will cause acid rain which kills amphibian embryos and tadpoles.